Stars are often gregarious things. Based on observation and theoretical models, many stars are born in clusters — groups of ten or more stars that were formed from the same interstellar cloud. The large globular clusters found orbiting galaxies may have hundreds of thousands or millions of stars, including some of the oldest stars yet observed. While astronomers once thought  all the stars in clusters formed from the same nebula at the same time, recent observations revealed that clusters can contain more than one generation of stars. For these reasons, understanding star clusters is essential for tracing the history and evolution of star populations, as well as their host galaxies. 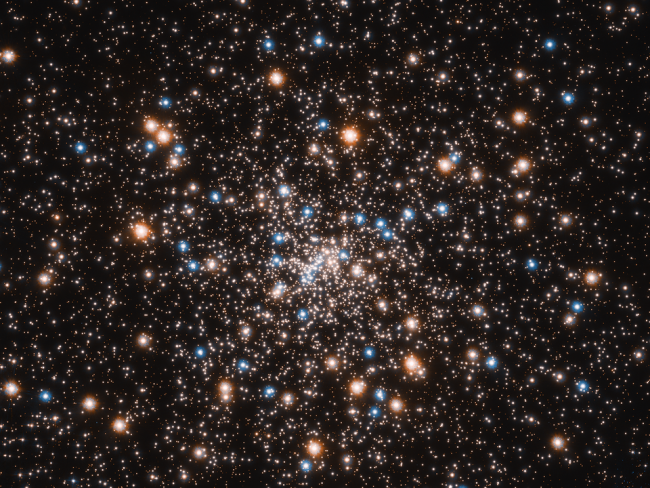 The globular cluster NGC 6397 contains around 400,000 stars, as seen in this image by NASA's Hubble Space Telescope. Roughly 150 globular clusters orbit the Milky Way; many of those, including NGC 6397, are older than the rest of our galaxy.

Globular clusters are nearly spherical collections of hundreds of thousands of stars, held together by mutual gravitational attraction. These beautiful objects are nearly free of gas and dust, and contain some of the oldest stars in a galaxy. The first stars within these clusters formed at the same time out of the same interstellar nebula, so they are the same age and chemical composition. Since the mid-2000s, astronomers using NASA’s Hubble Space Telescope and other observatories learned that clusters often harbor several generations of stars, showing them to be more complex than previously thought. Understanding this complexity is a major aspect of modern globular cluster research.

The Milky Way is host to around 150 known globular clusters, and a few more are likely to exist hidden behind the thick disk of our galaxy. The number of globular clusters in a given galaxy seems to depend on its mass: the Andromeda galaxy, our nearest big galactic neighbor, has over 400 clusters, while the giant elliptical galaxy M87 is home to more than ten thousand.

Researchers can determine the age of a cluster by its “metallicity”: the relative amounts of elements like oxygen, iron, and other elements heavier than helium. Young clusters have higher metallicity, while older ones are “metal-poor”, because they formed before supernovas had seeded the cosmos with heavier elements. The globular clusters near the center of the Milky Way are older than those farther out, and have similar ages. That indicates the younger clusters may have been formed during a merger with other galaxies, and the older clusters may be relics from when the Milky Way was born.

The stars in globular clusters are packed in much more tightly than in any other place in a galaxy. That leads to the creation of binary systems, including those with compact objects: white dwarfs, neutron stars, and black holes. Theoretical calculations show that exotic binaries, such as white dwarf-neutron star pairings, happen about 100 times more often than in the rest of the galaxy. Many of these systems are potential sources for LIGO and future gravitational wave observatories.

X-ray observations of clusters have revealed many of these binary systems, which include low-radiation quiescent low-mass X-ray binaries (qLMXBs), which are ordinary stars paired with neutron stars that pull matter from their companions into a hot accretion disk. Some neutron stars in binaries are millisecond pulsars (MSPs), objects that rotate hundreds of times every second. MSPs are “spun up” by collecting matter from their companion stars, so the density of globular clusters means these neutron stars have more potential partners.

Stars in open clusters likely formed at nearly the same time from the same nebula. These clusters are much smaller than globular clusters, containing dozens or hundreds of stars, and they fall into irregular rather than spherical shapes. Open clusters are typically younger than globulars, too, and often are rich in gas between the stars. The Milky Way is home to more than 1,000 known open clusters, but astronomers think the actual number could be ten times higher. That’s because they tend to live in the thick part of the galactic disk, where the density of stars, gas, and dust prevents us from seeing all there is to see.

The location of open clusters means passing stars and other objects tend to pull them apart over long periods of time. For that reason, most open clusters in the Milky Way are less than a billion years old, with older clusters located farther away from the galactic center. Open clusters are important laboratories for understanding star evolution, since they are home to relatively young stars as a rule.

Open clusters provide one means to measure distances in space. Since all the cluster’s stars are the same age, the main difference between them is determined by their masses. For stars in middle-age, the mass determines the color of a star: heavier stars are brighter and bluer, while lower-mass stars are redder. Mapping the apparent brightness of the stars of each color in a cluster and comparing it to the known amount of light emitted by those stars provides a way of knowing how far that light traveled to reach us. This method is known as “main sequence fitting”.

The youngest star clusters are embedded clusters: groups of stars swathed in interstellar gas and dust. These stars are often newly born or just forming, which means they are hot and produce intense radiation. However, the gas and dust that surrounds them absorbs much of the visible light they emit. Infrared observations are the most reliable way to observe embedded clusters.

Astronomers think most stars are born in embedded clusters, and open clusters are their later stage once star formation has run its course. However, not every embedded cluster survives to become an open cluster; they are often disrupted before the process is finished.

Embedded clusters are laboratories for studying newborn and very young stars. They provide the environment in which planets form, and dictate how much mass ends up in each star.

Close Encounter More Than 10,000 Years Ago Stirred Up Spirals Near Galactic Center