Astronomers have identified a number of newborn stars in the Milky Way, along with places where stars will form in the next few million years. But our galaxy’s rate of star formation is small compared with the starburst galaxies. These are powerhouse star factories, making stars at a rate hundreds of times greater than the Milky Way. Nearby starburst galaxies may resemble some of the earliest galaxies in the cosmos, and help astronomers understand the evolution of galaxies — and the stars born there.

Starburst galaxies don’t necessarily look brighter than ordinary galaxies, at least in visible light. That’s because star formation happens inside dense clouds of gas and dust, which absorb a lot of the visible light, particularly the blue light produced by newborn stars. When the dust absorbs the visible light, it heats up and re-emits in the infrared. For that reason, starburst galaxies are some of the brightest infrared objects in the universe, and emit up to 98% of their total energy in infrared. By comparison, the Milky Way’s infrared output is only about 30% of its total.

The result is a lot of baby stars: the most productive starburst galaxies convert 300 Suns worth of gas into new stars each year, compared to the Milky Way’s two or three. Many of those stars are also very massive, which means they burn brighter and hotter than the Sun. Massive stars like that are relatively short-lived; between that and the rapid consumption of available materials for star formation, starburst galaxies don’t keep up their rapid production of stars for very long, in cosmic terms. The starburst galaxy we observe today may not have been that way a few million years ago, and will have calmed down again in the future. 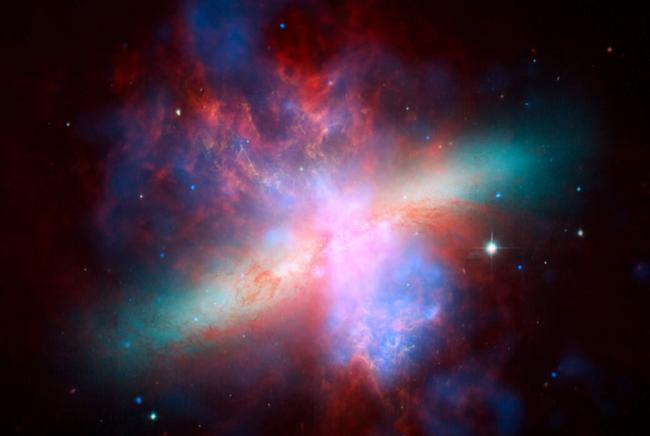 What Makes a Starburst?

To make a star, first you need the raw ingredients: gas and dust in sufficient quantities concentrated in one place. That means some galaxies simply can’t host starbursts, because they don’t have enough interstellar clouds. For that reason, starburst galaxies tend to be younger and gas-rich from a galactic evolution standpoint.

Most starbursts seem to be caused by collisions or near passes with other galaxies. These interactions push the gas in the galaxy toward the center, where it reaches sufficient density to cause star formation. In addition, the birth of massive stars can generate intense shock waves in the surrounding gas, which in its turn can make more stars. Likewise, when very massive stars die, their supernova explosions may compress gas to produce newborn stars. In other words, however the starburst process begins, it becomes self-sustaining, until it runs out of available ingredients.

For example, the starburst galaxy M82 appears to have passed close to the spiral galaxy M81. The rapid star formation and supernova explosions from massive stars in M82 have ejected a huge plume of material from the galactic center. Similarly, the colliding spiral galaxies called the Antennae are both undergoing starbursts.

M82 and the Antennae are both relatively close to the Milky Way, but starburst galaxies are bright enough in infrared light to be visible from billions of light-years away. When the universe was much younger, galaxies were more closely packed together, and contained a lot more gas. That means starbursts were more common, and in fact most galaxies — including ours — may have been starbursts at some point in the past. Studying distant starbursts is a way to trace the history of galaxies, as well as the cycle of star birth and death that created most of the elements in the universe.

Starburst galaxies like M82 are also host to a number of ultra-luminous X-ray sources, or ULXs. Astronomers think some of these are powered by black holes, which become ULXs by feeding on the available gas in the galaxy. As the gas falls in toward the black hole, it heats up, emitting X-rays. At least one ULX in M82 may be an intermediate mass black hole, an object in the mass range between the black holes created by the deaths of massive stars and the supermassive black holes at the centers of galaxies. 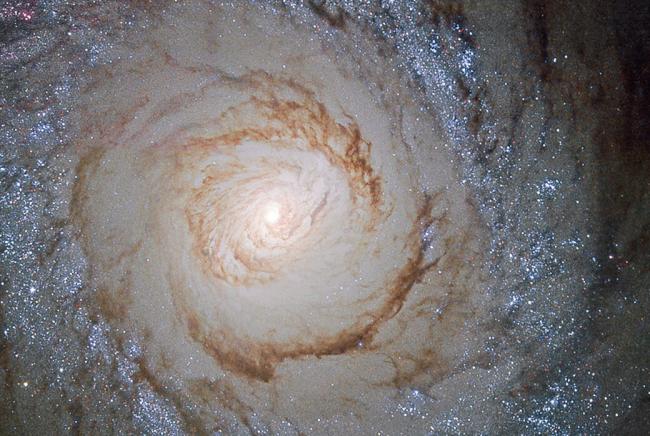 This Hubble Space Telescope image shows the starburst galaxy M94. One of the most distinctive features of this galaxy is the ring of rapid star-formation, marked out in blue light.

Making Stars When the Universe was Half Its Age

The Extreme Nucleus of the Galaxy Arp220

Massive Galaxies in the Early Universe