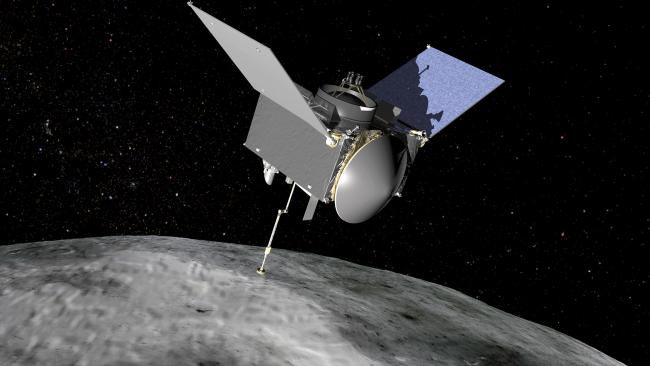 Artistic depiction of NASA's OSIRIS-REx (Origins, Spectral Interpretation, Resource Identification, Security–Regolith Explorer) spacecraft at the asteroid Bennu. The arm extending from the spacecraft's lower surface will take material from the surface of Bennu for return to Earth.

The Spacecraft and the Science

OSIRIS-REx is an ambitious space probe. Its seven-year mission involves flying to Bennu, orbiting the asteroid and studying it with a suite of scientific instruments, then swooping in to extract a sample of the regolith, the granular material covering the surface. Finally, the probe will return the sample to Earth for study in the laboratory.

Like many asteroids, Bennu is a small “rubble pile”: a collection of rocks and dust particles held together by gravity. These materials are relatively pristine, meaning they are more or less as they were when the asteroid formed early in the history of the Solar System. As such, Bennu is a bit of planetary paleontology, a relic of the “solar nebula” out of which the planets, including Earth, formed. It’s also potentially dangerous: the asteroid’s orbit brings it close to Earth, and there’s a very small chance it will crash into the Earth in the late 22nd century.

Bennu’s surface is fully exposed to all the radiation produced by the Sun. The X-rays from the Sun strike molecules on the asteroid, making them fluoresce: emit their own X-ray light, with a spectrum depending on which molecules are present. Among the many scientific instruments carried by OSIRIS-REx is the Regolith X-Ray Imaging Spectrometer (REXIS), developed by students at the Center for Astrophysics | Harvard & Smithsonian and the Massachusetts Institute of Technology (MIT). REXIS is only the second student experiment to fly on a NASA mission to another world; its role is to study the X-rays emitted from Bennu’s surface as it is bombarded by sunlight. REXIS is designed to study that spectrum and identify the materials on Bennu’s surface. The instrument’s design and development involved nearly 50 undergraduate students from Harvard and MIT, under the direction of asteroid researchers.

OSIRIS-REx was launched on September 8, 2016 and will return with its sample materials to Earth on September 24, 2023.